[Ed Note:  Veronica Martisius is a student at the University of Victoria Faculty of Law, the co-chair of the Indigenous Law Students Association, and was a co-op student with the Indigenous Law Research Unit at UVic during the 2018 Winter Term.  We invited her to contribute a post reflecting on the workshop discussed below.]

In the wake of the acquittals of Gerald Stanley and Raymond Cormier for the murders of two Indigenous young people, Coulten Boushie and Tina Fontaine, The University of Victoria arranged  ‘5 Days of Action’.  During those 5 days, faculties and groups across campus held a number of action-based events.  One of these was a collaborative workshop involving the Office of Indigenous Academic and Community Engagement, the Office of Equity and Human Rights, and the Faculty of Law.  The two-hour workshop was held at the First Peoples House and was open to the public.  Approximately 40 people participated.  I was one of the facilitators of this workshop (along with Professors Gillian Calder and Rebecca Johnson), and offer here some reflections on the event.

The purpose of the workshop was twofold: 1) To actively engage in making UVic a diverse, welcoming and inclusive place to study, work and live and; 2) To create space for Indigenous laws. In their article Gathering the Threads, Napoleon and  Friedland remind us that “State law is not the only source of relevant or effective legal order in Indigenous peoples’ lives…Indigenous laws continue to [exist and] matter today.”

Canada is a multi-juridical society, and, as such, justice systems ought to reflect an understanding of law across social boundaries in order to be just.

The Stanley and Cormier cases illuminate ongoing institutional discrimination and systemic racism on the part of Canada and its laws.  In particular, Canada’s criminal justice system, which was imported from Britain and imposed on Indigenous peoples, does not reflect Indigenous values or notions of what justice requires nor does it incorporate Indigenous legal orders.  But what if it did?  What might that look like? To answer those questions we had the workshop participants take a close look at the story of Mikomosis and the Wetiko.

The graphic novel, Mikomosis and the Wetiko, is based on a story told by Val Napoleon, drawing on graduate work done by Hadley Friedland (now published as The Wetiko Legal Principles) and by the Indigenous Law Research Unit (ILRU) while it was working on the Accessing Justice and Reconciliation Project.

The story explores the tale of a Cree man sentenced to death by a 19th-century Alberta court after carrying out an execution ordered by his Cree community  under a Cree legal concept known as Wetiko.

A team of Indigenous lawyers travel back in time to intervene and apply aspects of Cree law and legal processes not originally presented. With a more in-depth understanding of the circumstances, the court finds the accused not guilty.

*** In the graphic novel, Mikomosis executes Sap-was-te when it is determined by the decisions makers that there is no other way to keep the group safe from her increasing violence.  Just as execution would not be an option in Canadian law today, it is important to point out that this would never be a current option in Cree law today either. ***

You might be thinking to yourself, “why is this story relevant in responding to the Stanley and Cormier verdicts?”

It is relevant because, as Robert Clifford (2014) argues, “colonial power structures are best mitigated and subverted by applying Indigenous narratives, including Indigenous systems of law.”  In other words, Canada is a multi-juridical society, and, as such, justice systems ought to reflect an understanding of law across social boundaries in order to be just.  Mikomosis and the Wetiko is one example of how Indigenous societies used and applied their own legal principles to deal with harms and conflicts between and within groups and how they might be usefully applied today.  For information about a current example of Indigenous law and procedure in action on Coast Salish territory, click here.

During the workshop we started off by asking the participants two questions:

2) What do you think of, or picture, when you hear the concept ‘Indigenous laws’? 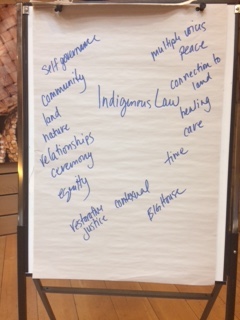 After the large group discussion, we divided up the participants into groups of three. Over a delicious lunch of soup and bannock, we asked each participant to read the graphic novel.  In addition to being provided with a copy of the graphic novel, participants received a handout including a glossary of terms and Cree words, and a set of ‘re-framing’ questions that move from generalizations to specifics.  For example, with respect to the latter, moving from “what is aboriginal justice?” to “what are the legal concepts and categories within this legal tradition?”

After lunch, each group engaged in a facilitated conversation.  To help guide the conversation, we used the Mikomosis and the Wetiko: A Teaching Guide for Youth, Community and Post-Secondary Educators, and asked the following questions at page 40:

Each conversation generated a diverse range of comments and questions around the relationship between Indigenous laws and Canadian law, pan-Indigeneity, responsibility vs. guilt, safety and protection of the victim(s) and the community, different legal processes, burden of proof, gendered power dynamics, ‘Whiteness’, decolonization, and dispelling stereotypes about Indigenous peoples.

Participants expressed a desire for change with respect to addressing and eliminating the injustices that Indigenous peoples continue to face.  They talked about how to affect change in their daily lives through introspection, getting to know the local Indigenous community, learning about the land they live, work and/or play on, their responsibility as guests/visitors, building relationships, engaging with their various social networks (family, friends, classmates and co-workers) about the issues, and lobbying the government.  At the end of the workshop, each participant wrote themselves a letter as a future reminder of their individual commitment to take up the Truth and Reconciliation Commission’s Calls to Action.

In a March 14, 2018 article that explores the idea of a cross-cultural criminal justice system, law professor, Marilyn Poitras said, “[g]oing home to suburbia or the farm or the reserve and shutting the door is not going to work. How are we going to open doors, open hearts, open conversations? For the sake of future generations people need to talk with each other.”

If you are an educator, lawyer, law student or a concerned citizen who is not sure how to spark up meaningful discussion about ways to re-frame justice in Canada, consider bannock, a graphic novel & conversation to get the ball rolling.

Violence against Indigenous women and girls is pervasive in Canada. The National Inquiry  Interim Report, (Our Women and Girls are Sacred) cites an estimate that Indigenous women are “12 times more likely to be murdered or missing than any other women in Canada, and 16 times more likely than Caucasian women” (at pp. 7-8). And the Native Women’s Association of Canada points out that numbers alone communicate little about the lives of Indigenous women and girls, or the calamitous losses experienced by their families and communities.  As NWAC point out in their discussion of the Faceless Dolls Project,  “each statistic tells a story.”

In a new chamber opera that debuted in 2017 in British Columbia, librettist Marie Clements and composer Brian Current portray ongoing colonial violence against Indigenous women and girls and emphasize the need for difficult learning.

Missing, performed in English and the Gitxsan language, immerses audience members in a discomfiting comparison of the divergent life chances of two young women with similar aspirations. Ava, a white law student, passes by a hitchhiker on the notorious Highway 16, the “Highway of Tears” where so many women have gone missing. After a car accident, she glimpses the body of a high school student, a character Clements names only “Native Girl,” who stands in for the multitude of lost girls and women.

Ava returns to her studies after recovering and encounters Dr. Wilson, a guest lecturer, whose discussion of missing and murdered Indigenous women challenges students to move beyond fleeting sympathy to grapple with their own complicity. “What is missing,” Dr. Wilson asks the students, in a society that “can’t recognize another human being as another human being?” One of Ava’s classmates disavows shared responsibility for the structures and histories that make Indigenous women vulnerable to violence; she angrily insists that they are to blame for their own “bad choices.”

The student’s defensive reaction in the opera, and her reliance on problematic stereotypes, will be familiar to many instructors. Maxine Matilpi explains that “when we dispel lies and deal with the omissions from their prior education, non-Indigenous students tell me that they would rather we didn’t spend so much class time on colonization or racism; they find it uncomfortable and frustrating, even irritating” (See her article “Personal Political Pedagogy with Respect to #MMIW” in D. Memee Lovell-Harvard and Jennifer Brant, eds, Forever Loved: Exposing the Hidden Crisis of Missing and Murdered Indigenous Women and Girls in Canada (2016), p. 264).

But in the opera, Ava, is not defensive.  She has been transformed by her near-fatal accident, and is receptive to Dr. Wilson, who instructs her in the Gitxsan language and then mentors her when she becomes a new mother. The care and cultural teachings that Ava receives are further reminders of what the other young woman was deprived of by her assailant, while scenes of her mother’s limitless grief portray how badly she is missed. As Ava encounters Native Girl in uncanny ways, she learns to reach out to her, offering care and witnessing.

Marie Clements, an acclaimed Métis playwright (she is also the writer and director of the new film The Road Forward), when interviewed about Missing, said that her desire was to create a work in this Opera that would engage the empathy of Indigenous and non-Indigenous audience members by portraying “a Canadian story . . . one that we’re all responsible to.”

The disappearances and tragic deaths continue, and at the first hearings of the National Inquiry, families have described losses that extend across generations. Marilyn Dumont, a Métis poet and professor, commemorates Helen Betty Osborne, a high school student who had to move away from home to attend high school. “Betty,” Dumont writes, “if I set out to write this poem about you / it might turn out instead / to be about me / or any one of /my female relatives.”

Clements’ opera is a great resource for those looking for ways to engage with the difficult realities of our shared colonial histories in ways that make this story one that we are all responsible to.

Interim Report of the National Inquiry into Missing and Murdered Indigenous Women and Girls, “Our Women and Girls are Sacred” (2017) http://www.mmiwg-ffada.ca/files/ni-mmiwg-interim-report-en.pdf